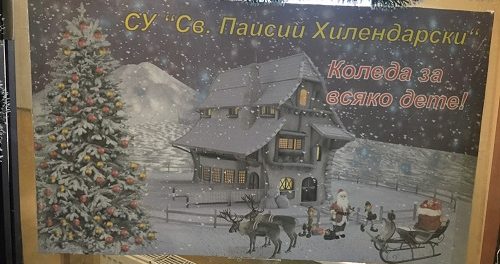 Between 16 – 19 December 2019 we held the ninth workshop with first grade students of „St. Paisii Hilendarski“ Secondary School, Plovdiv, under the title „Christmas for every child “. The participants were: pupils with disabilities – with visual impairments, hyperactive, with muscular dystrophy, with special educational needs; students who do not speak Bulgarian; students without disabilities – talented, gifted and more.

In order to have a festive atmosphere, the way of arranging the tables was changed in order to improve the interaction between the children and to make it more convenient to work in a team. Each child received a Christmas hat.

At the beginning, Ms. Grudeva and Mrs. Ikimova, together with the children, recalled details of one of the biggest holidays in Bulgaria – Christmas and concluded that all Christians, regardless their physical and mental state, celebrate it and that the biggest joy for the children is the presents under the Christmas tree. So they put the motto of the workshop – “Christmas for every child”.

The participants were acquainted with the goals and the objectives of the project. It was announced that in that one-week workshop we would try to work together as a team, to help each other, so that everyone could finally cope with the set tasks and all the participants could celebrate together the successful implementation of the tasks, as well as the holiday – Christmas in a magical place.

Conclusion of the conducted workshop:
All the children accepted the idea with great joy; excellent teamwork; each child was ready to help the other however they could; there was almost no need for teacher intervention, the children were so inspired by their work, that they wanted to continue with the next activity, after everyone had completed the previous one; excellent creative atmosphere.

There were 25 students working, but it seemed as if only one was working, even sometimes there was a slight dispute about helping each other – smiling and satisfied faces from the well done job. During the celebration, the child with muscular dystrophy did not stay even for a minute alone – there were constantly participants who wanted to be around him. When it was not possible for the child to participate in the game himself, he watched and supported his team verbally, even sometimes giving them advice.

The hyperactive child became a captain of one of the teams. The children, who didn`t know Bulgarian, were held by hand and led by their classmates on the stage. With a little help from a teacher, the pupils with special educational needs got involved wherever possible in the games, and the rest of the time they watched and enjoyed themselves, clapping.

From the conducted workshop and observing the children’s reactions all the time, we came to the conclusion that the goals and the objectives of the project were achieved. Everyone was working and having fun together and nothing showed that there were children with some kind of disability.

The event was organized by Ms Grudeva and Ms Ikimova as a ninth workshop within the project in order to raise pupils’ awareness of the benefits of working in a team, the good result of cooperation and mutual assistance among classmates, as well as the successful participation and inclusion of students with disabilities. 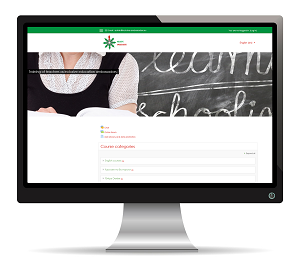